A look back at the cannabis campaign in 2013

Since the formation of NORML UK in May 2012, this is our first full year review and what a year it’s been, particularly on the world stage concerning cannabis policy.

Thankfully, the new year did not start with the banning of foreigners from the famous coffeeshops of Amsterdam. The hated Wietpas scheme was only introduced in the South of Holland, which resulted in a massive increase in street dealing in places like Maastricht and a loss in city tax revenues.

Following the passing of voter initiatives legalising marijuana for recreational usage in two states in the USA (Colorado and Washington State); we are set to see the first legal cannabis shops open in Colorado on 1st January 2014. More importantly the US Federal Government in the USA pledged not to interfere in state-licensed retail sales of cannabis, with Deputy Attorney General James Cole issuing a three-page memorandum in August affirming that the US Justice Department will allow Colorado and Washington to move forward with statewide efforts to license and regulate the adult marijuana market. 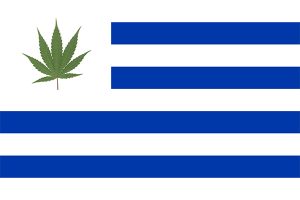 Perhaps more significant was the pushing through of legislation in Uruguay, making it the first country to formally legalise the recreational sale of cannabis. Jose Mujica, the world’s poorest president, pushed through plans, despite opposition from faceless unelected bureaucrats like Raymond Yans, head of the International Narcotics Control Board. The first legal recreational pot dispensaries are to open in Uruguay later in the year and it is now legal to grow your own cannabis plants in Uruguay.

Here in the UK, NORML has been establishing itself as the leading cannabis campaign organisation in Britain, with over 32,000 likes on Facebook, second only to the London Cannabis Club.

April 20th 2013 saw the largest pro-pot gathering the UK has ever seen with over 10,000 turning out for the Hyde Park 4/20 smoke-out organised by the London Cannabis Club. Further smoke-outs were organised from far afield as Exeter to Glasgow, with plenty more planned in 2014. 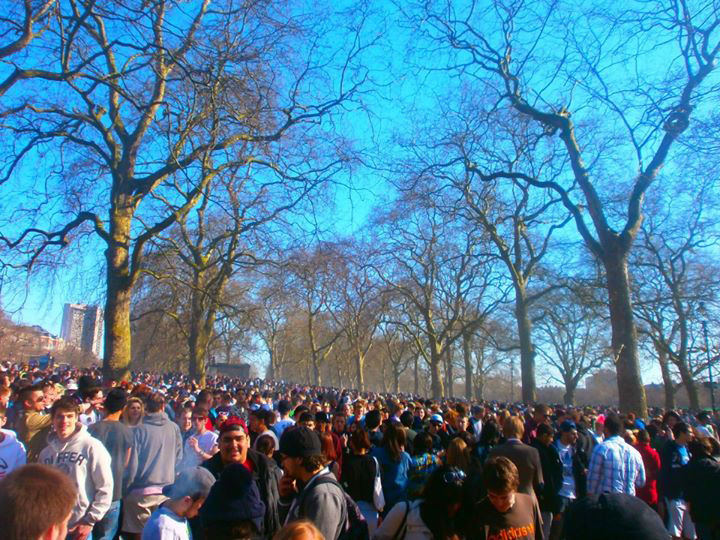 The following month, NORML UK held its first ever Annual General Meeting at the Malcolm X Community Centre in Bristol. The event included a wide range of speakers from all sorts of different backgrounds, from former drugs smuggler, Howard Marks to ex-senior police officers Tom Lloyd and Rowan Bosworth-Davies. Over one hundred people attended the event and the board of NORML UK are currently in the process of arranging our second AGM; details of which are to be announced soon.

In October, NORML UK organised the Cannabis Hypocrisy Protest outside the Houses of Parliament. It was held on a slightly cold Wednesday, because we wanted to hold the gathering while MPs were sitting. However that didn’t stop a few hundred people from turning up throughout the day. Prominent MPs were handed with leaflets and a patient with all the correct paperwork attended the event with her legally imported Bedrocan herbal cannabis, along with other UK patients who are denied the same medicine by our cruel Government that currently maintains the lie that cannabis has no medicinal value (although that didn’t stop them from sparking up outside Parliament). 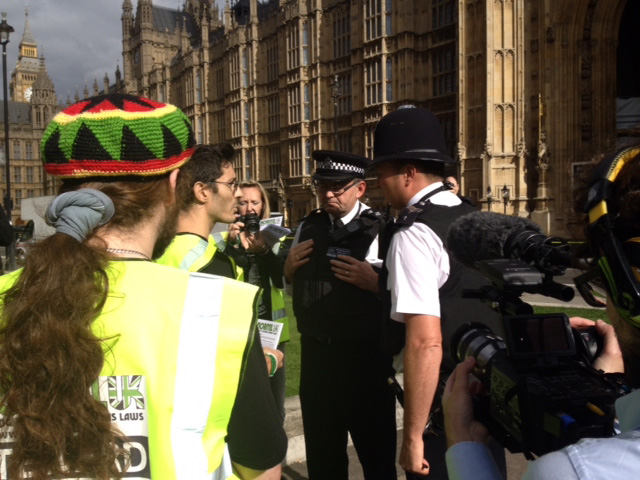 NORML UK’s Al Pavia explains the law to the police after the Sergeant of Arms sent them to ask us to leave College Green opposite Parliament.

The following November, NORML UK organised another event at London South Bank University (LSBU) with respected American journalist and author of Too High To Fail, Doug Fine, as part of his European Drug Peace tour. The evening also included short presentations by Dr Gary Potter, a senior lecturer in criminology at LSBU and Michel Degens of the Mambo Social Club in Belgium. Doug Fine spoke of the progress made in the USA and proclaimed the drug war against cannabis (in America at least) to be over, and claimed that it is now not a question of ‘if’, but rather ‘when’ it will be legalised. The event was an interesting and enjoyable evening for all involved and received coverage in the respected magazine Vice.

NORML UK was also encouraged by the appointment of Norman Baker as the new Home Office Minister in charge of the Government’s drugs policies. Mr Baker is from the liberal left of the Liberal Democrat party and is on the record of saying cannabis is no more harmful than alcohol or tobacco. In November he refused to rule out legalising cannabis, telling MPs ‘we should be prepared to follow the evidence’. NORML UK will be providing Mr Baker with plenty of evidence and we hope he and the Government follow the lead of Uruguay, and some states in the USA, by ending the prohibition of cannabis in the UK.

In the mean time, NORML UK would like to take this opportunity to wish all our supporters a happy new year and promise we will continue to work tirelessly to end the daft and unjust laws prohibiting cannabis in Britain.