Home » News » How far away are we from not being punished?

TODAY I sit on my sofa at 05:45 and take a look outside. It’s 26/06/2012 but it feels more like 26/11/2012, the rain is lashing down and it’s very windy. Longest day and all that! It seems and feels like winter even though it’s the summertime. My garden flowers have taken a hell of a kicking, but like me they will bounce back to reward the ones that need.

Campaigner and medicinal user of cannabis, Des Humphrey, wants to know when he can grow his medicine without fear of arrest or persecution.

I woke up this morning asking myself the same question as millions probably ask themselves every morning in the UK:

“When will we be able to consume and grow cannabis for personal use without fear of being arrested and criminalised?”

Some days I get so down on myself because I can’t find the answer out, sometimes the answer comes flooding to me but soon goes flashing by. I look at people as one. Not as race or where they live, but as humans. Take cars for example. There are thousands of different models that can hit this speed and turn that fast, but every car needs certain things to make them work and move. If a car has no wheels, it’s not going to get very far. If it has no engine, it’s going nowhere. If you don’t fuel it up, it’s staying put. Same sort of thing with a human: our inner bodies and minds all work the same. We all need our organs to work in order to survive, as well as keeping our minds healthy and active.

As a global community, we as humans have been divided, sectioned off, and had boundaries put in place by other humans who gave them the right to do this. In my eyes, I see that governments have been given these powers by me and you; these people in power have been put there by our good selves.

No matter where you go in the world a human is a human, but some are cleverer than others, so schools are set up to try and make us all clever. We are taught about things that are common knowledge, such as the world is round, the shiny things in the night sky are stars and other planets.  We are also taught right from wrong. Now, if a young human growing up wants to learn about science, they are taught basic science and many humans are taught similar things. When he or she passes their exams, earns their degrees, and becomes a scientist, that’s when they really begin to learn.

In America there are 17 states where doctors can recommend cannabis for medical treatment, and these state governments recognise that herbal cannabis has medicinal values. So what is the difference between the USA and the good old UK? Do we breathe a different kind of air in the UK compared to the USA?

How can one government say cannabis has medicinal values and another government say it hasn’t? I just can’t get to grips with that, but let’s sit back a minute and think.

We have GW Pharmaceuticals who have obtained a special license to grow cannabis that was issued for scientific research. Then they start to supply parts of Europe with this cannabis spray, extracted from the same cannabis that we can all grow, and it has medicinal values.

After listening to the likes of Sir Richard Branson giving evidence at the HASC (Home Affairs Select Committee) in January 2012, I am more than convinced (if I wasn’t before) that the market for cannabis in Britain should be regulated, and responsibility for drug policy moved from the Home Office to the health department http://www.guardian.co.uk/politics/2012/jan/24/cannabis-tax-branson-mps-virgin .

Also at the HASC in April 2012, comedian Russell Brand told MPs that taking drugs should not be seen as a criminal or judicial matter and that drug users should be shown more compassion . Prof. David Nutt testified in June of this year that alcohol consumption would fall by 25% if cannabis cafes were allowed . He also said, “The cost of policing cannabis use was only £500m a year, mainly for issuing possession warning notices, compared with the £6bn a year bill for policing the use of alcohol, including dealing with people who were drunk and disorderly.”

Prof. Les Iversen, chairman of the Advisory Council on the Misuse of Drugs, argued at the HASC that, “Giving young people a criminal record for cannabis possession could have a major impact on the rest of their lives.” He added, “There must be more creative ways of dealing with personal drug possession than a criminal record.”

So we have both the former and current chairmen of the ACMD both giving advice to the government about cannabis, but Home Secretary Theresa May refuses to listen, saying she is not interested in such an approach. 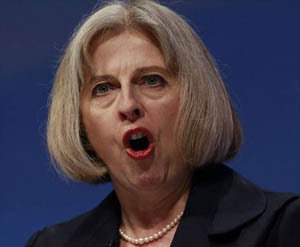 May refuses to change the record and insists the current policies are working.

“I have a very tough view on drugs. That view is informed by people I speak to who have seen the damage the drugs have done to people in their family,” she said at a lunch for journalists at Westminster. “I think there are far too many people who think drugs are something you can do without it having an impact, but it does have an impact.”

Ms. May, your apparent unwillingness to form coherent and beneficial governmental policy has much more of an impact. We find it difficult to believe you care about the well-being of your constituents, because it’s clear from your political record that you refuse to listen to your advisers. Your insistence that you will not entertain alternatives to criminalisation suggests that you are more committed to a failed ideology than to the health and safety of the British public.

Take cover, Prof. Iversen, or you may end up like Prof David Nutt: sacked for telling the truth.

So where do we go from here?

We must hold ourselves accountable for our own complicity. We have voted for politicians time and again who pursue the same failed drug policies, and now we must stand up and demand a new way forward. Politicians will not change their tack on drug policy until we create an environment in which they feel empowered to take bold steps. The most important thing we can do as individuals is to simply engage with the public in a constructive and positive way.  I have been on the streets lately to ask people questions about cannabis:

Out of all the people who have the time to stop and chat about these four simple questions, it made me realise that even cannabis consumers could use a more thorough education. When it comes to which strains work best for which ailments, or making medicinal edibles, or even the least risky ways to consume cannabis, we all have a lot of work to do even within our own community. We need to support each other and share our knowledge so that we can provide reliable information to people who are just learning about cannabis.

But most of all, I was surprised to see that just a casual and friendly conversation was able to open people’s minds to the truth about cannabis. NORML UK is determined to provide space and opportunity for more of these conversations by hosting town hall meetings and networking with cannabis social clubs all over Britain. But you don’t need to wait for us to get the ball rolling! It’s got to be done by each of us, singing from the same hymn sheet, preaching the same truth. Get involved by delivering leaflets with a few mates around your local village, town, or city–going door to door if needed. Set up your own little stall with a table and some leaflets featuring facts about cannabis. We have to sing a chorus too loud to ignore!

Remember, for anything to grow and be successful we need to start from the beginning and work up. NORML UK is the seed, its members are the roots, and together we can grow a new way forward! Get involved and get started!